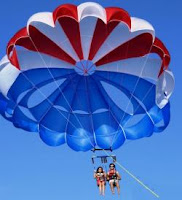 The Florida Keys are a chain-like cluster of about 1700 islands in the southeast United States. They begin at the southeastern tip of the Florida peninsula, about 15 miles (24 km) south of Miami, and extend in a gentle arc south-southwest and then westward to Key West, the westernmost of the inhabited islands, and on to the uninhabited Dry Tortugas.
The islands lie along the Florida Straits, dividing the Atlantic Ocean to the east from the Gulf of Mexico to the west, and defining one edge of Florida Bay. At the nearest point, the southern tip of Key West is just 90 miles (140 km) from Cuba.
A Florida Keys vacation is the perfect tropical retreat from stress. Separated from the rest of the world, the Florida Keys stretch 100 miles away from the mainland and a Florida Keys Vacation offers new experiences for both old and young alike.

Travelling Time
You can figure it will take you three hours to get from the mainland to Key West, longer if it's either side of a weekend, and forever if it's a holiday.

Key West
Key West, Florida attracts visitors looking for an escape from the ordinary. Daytime offers diving, snorkeling, fishing, shopping and sunbathing on the beach. After the big sunset celebration the nightlife begins.
The southernmost point in the U.S., Key West, Florida is famous for watersports, lively nightlife, beaches and historic sites such as the Ernest Hemingway House.
Choose from a variety of watersports - Reef Snorkeling or Sunset Cruises/Sails aboard the Fury Catamaran, thrills in the air with Fury Parasailing, or Reef Eco-Tours aboard the Fury Glass Bottom Boat. Private Charters are also available. For the real enthusiast, try Fury’s Combo Packages or Fury’s Ultimate Adventure which includes Reef Snorkeling, Parasailing, Jet Skiing, Kayaking, Rock Climbing, Water Trampoline and much more. 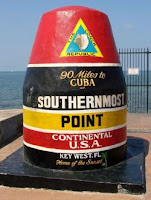 Some of the Attractions in Key West Include Southernmost Point, Museums, Key West Aquarium, Key West Butterfly & Nature Conservatory, Conch Tour Train, Curry Mansion, Flagler Station, Hemingway House, Old Town Trolley, Shipwreck Historium, Southernmost House
Snorkeling is the most popular water activity down in Key West. Just a few miles off the coast of Key West, you will find one of the largest stretches of coral reef in the continental United States. Hundreds of species, both plants and animals, make their home in the coral reef gardens. See all kinds of multicolored tropical reef fish, rays, and sometimes even the elusive sea turtle! Our tours feature a variety of options for snorkeling, so you will be sure to find the right trip just for you!
Parasailing
If you are looking for the best view in Key West, consider catching the view from the air. The aerial perspective is simply amazing, and we are sure you have never seen anything like it in Key West.
You will drift 600 feet above the island and have a perfect view of everything below you. You can enjoy your parasailing adventure on your own or go as a couple (tandem). You will see everything that Key West has to offer including the wildlife living in the water below you.

Islamorada
Islamorada bills itself as the "Sportfishing Capital of the World." Visitors truly have their pick of the litter when it comes to chartering boats for some serious angling. Marlin, Wahoo, Tuna, and Sailfish are popular targets because they are so big and present a fun challenge!

You can take tours of Islamorada aboard an air-conditioned bus, or above in an ultra-light. You can experience the waters around the islands aboard a glass-bottomed boat or on an organized wave runner tour.

Big game fishing is king in the Islamorada area; the many celebrities of the past and present who have been drawn here would attest to that fact. The Gulf Stream comes in close and that is where you find the fish. Islamorada boasts the largest concentration of fishing boats in the Florida Keys. If the price tag for a private charter is beyond your means, you can always reserve a place on a party boat. Bridge fishing is very popular too, but you do need your own equipment and a license. Many restaurants in the area will cook your catch.

Many interesting dive sites grace the waters around Islamorada. Alligator Reef Light, Davis Reef (with its statue of Buddha), Horseshoe Reef (with its statue of Jesus) and Pickles Reef are only a few. The San Pedro Underwater Archeological Preserve and the Eagle site are great for wreck diving. Snorkelers can have great fun at Cheeca Rocks, located 600 yards out from Cheeca Lodge, and Hens and Chickens Reef, with its huge coral heads and caves.

If you want to get closer to the Keys marvelous marine life, you can feed the tarpons at Robbie's Marina; some of them are as long as 6 feet. You can also swim with the dolphins at Theatre of the Sea, a marine park that is home to dolphins, sea lions, sharks, stingrays and sea turtles. You can also spend time with injured specimens like a blind crocodile and some sea turtles missing fins caused by entanglement with monofilament fishing line.

World-class sport fishing is available offshore, on the reef and flats, along the bridges and in nearby Everglades National Park. Snorkel and scuba dive excursions can fulfill most divers' appetites, while kayak aficionados can paddle through the solitude of local backcountry waters.

Additionally, visitors can charter a sailboat, play golf and tennis, take in the theater and eat at one of the many fine restaurants.

The islands of Marathon also offer opportunities to tool around on mopeds, visit a sea turtle hospital, take water-taxi tours and visit a traveling pirate museum.


Key Largo
The first island you hit once you leave the continent is the one made famous in the John Huston gangster film, Key Largo, starring Lauren Bacall and Humphrey Bogart as a down-on-his-luck vet looking for purpose. Key Largo is the largest of all the Florida Keys. It's also the closest to major airports like Miami and Fort Lauderdale, making it the most convenient destination for a Florida Keys vacation. These days, perhaps because of its proximity to the mainland, Key Largo is quite burdened with the trappings of convenience, and unless you're a diver or sport fisherman, you might want to search for your fortune down the road instead, where you'll have full access to the warm emerald and azure waters and sugar-like sand, not to mention lots of Key lime pie and mouth-watering seafood.


Activities on the water are fabulous attractions. Parasailing, watercraft rentals and sailing are just a few ways to enjoy the heavenly water. For family excursions there are tours, museums, national parks and even an alligator farm!

There are plenty of places to eat and stay along the keys, but lodging in particular can be pretty pricey all year, and reservations are recommended. There is no real "season," though ..... For better or worse, the road is absolutely straight and flat (the highest elevation on the islands is a whopping 18 feet). Still, it's the most unusual stretch of road in America. So, when you're planning your next adventure, don't forget the Keys.


Seven Mile Bridge
One of the longest bridges when it was built, the Seven Mile Bridge connects Knight's Key (part of the city of Marathon in the Middle Keys) to Little Duck Key in the Lower Keys.
Early history of Florida Keys
The Keys were originally inhabited by Calusa and Tequesta Native Americans. They were later found and charted by Juan Ponce de León. "Key" is corrupted from the Spanish Cayo, meaning small island. For many years, Key West was the largest town in Florida, and it grew prosperous on wrecking. The isolated outpost was well located for trade with Cuba, the Bahamas, and was on the main trade route from New Orleans. Improved navigation led to fewer shipwrecks, and Key West went into a decline in the late nineteenth century. A legend says that shipwreckers removed navigational markers from shallow areas to strand unsuspecting captains ashore.
Overseas Railway
The Keys were long accessible only by water. This changed with the completion of Henry Flagler's Overseas Railway in the early 1910s. Flagler, a major developer of Florida's Atlantic coast, extended his Florida East Coast Railway down to Key West with an ambitious series of over-sea railroad trestles.
After the destruction of the Keys railway by the Labor Day Hurricane of 1935, the railroad bridges, including the Seven Mile Bridge, were converted to automobile roadways. U.S. 1 runs the length of the Keys and up the East Coast to Maine; the Keys section is also called the Overseas Highway.
Florida Keys
Florida Keys Webcams
Posted by Places to Visit at 12:34 PM