Top Hawaii Destinations
Hawaii is an archipelago of over nineteen distinct volcanic islands located over a geological "hot spot" in the Central Pacific. The Pacific plate on which the islands ride moves to the northwest, so in general the islands are older and smaller as you move from southeast to northwest. There are eight major islands, six of which are open to tourism. 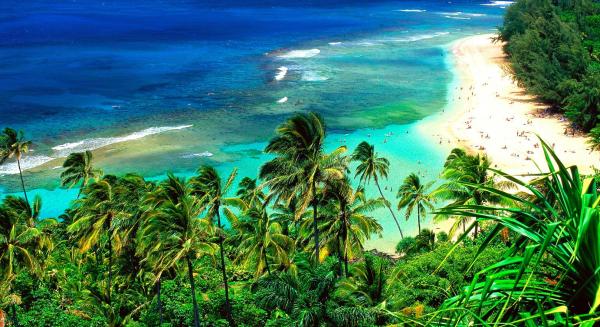 Oahu - Pearl Harbor
One of the most popular landmarks in Hawaii, Pearl Harbor is the largest natural harbor in the state and also the only naval base in the United States to have the distinction to be recognized as a National Historical Landmark. Pearl Harbor offers visitors a variety of ways to learn about the history and the events of the past. To honor this history, this historical landmark has been preserved with four museums which include an emotionally touching memorial, a battleship which saw the tides of war and the beginnings of peace, a fully restored World War II submarine, and an aviation museum complete with fighter planes and flight simulators.
Oahu - Polynesian Cultural Center
Hawaii's Polynesian Cultural Center, located about one hour's scenic drive from Waikiki, is the top paid Hawaiian attraction for a reason. Virtually seven native villages give visitors the rare chance to participate in the daily adventures of Hawaiian and other South Pacific cultures. Add Hawaii's most authentic luau and the world's largest Polynesian night show and you'll see why every trip to Hawaii should include a visit to the Polynesian Cultural Center.
Maui - Haleakala
This special place vibrates with stories of ancient and modern Hawaiian culture and protects the bond between the land and its people. The park also cares for endangered species, some of which exist nowhere else. Come visit this special place - renew your spirit amid stark volcanic landscapes and sub-tropical rain forest with an unforgettable hike through the backcountry.
Maui - Molokini
Located 2 ½ miles off Maui's south coast, Molokini is an extinct volcano that is now designated as a State Marine Life and Bird Conservation District. Its crescent shape acts as a fortress that provides protection from waves and powerful currents making this area one of the top ten dive sites in the world.
Big Island - Hawaii Volcanoes National Park
With its dramatic landscapes and ever-changing lava show, it’s little wonder that Hawaii Volcanoes National Park is the number one visitor attraction in Hawaii. Kilauea Volcano has earned a reputation as the world’s most active volcano, with a continuous flow of molten rock oozing from its flanks to the sea since re-awakening in 1983. You can explore the steam vents, lava tubes, and old lava flows on foot, or take a helicopter tour to feel the lava heat up-close. So Hawaii Volcanoes National Park is very much open for exploring and amazing views of volcanic activity.
Big Island - Mauna Kea
This seasonally snow-capped mountain, Mauna Kea, appropriately translates lyrically into "White Mountain." Many myths and legends capture the beautiful essence of this sacred mountain, which is considered a haven of spirituality to the native Hawaiians. From it's highest cinder peak, Mauna Kea's lofty majesty stands as the tallest mountain in Hawai'i and is considered to be the highest mountain in the world when measured from the sea floor. Join a tour to travel to the top of Mauna Kea and reach up to touch the stars. Stare deep into the darkness of our unclaimed universe and sip on a delicious warming beverage as you take in the cold and crisp surroundings of this Hawaiian wonderland.
Kauai - Na Pali Coast
This fifteen-mile stretch of rugged coastline on the northwest shore of Kauai literally means "the Cliffs." Much of Na Pali Coast is inaccessible due to its characteristic sheer cliffs that drop straight down, thousands of feet into the ocean. Sailing, rafting and hiking are the best ways to experience Na Pali's myriad of natural wonders. A must-do Kauai activity.
Kauai - Waimea Canyon
Waimea Canyon is the largest canyon in the Pacific and truly a dramatic sight to behold. The canyon measures 10 miles long, 1 mile wide, and more than 3,500-feet deep. It was carved thousands of years ago by rivers and floods that flowed from Mount Waialeale's summit. The lines in the canyon walls depict different volcanic eruptions and lava flows that have occurred over the centuries. Even though smaller than the Grand Canyon of Arizona, Waimea Canyon rivals the beauty. Numerous lookouts and hikes offer terrific views of every aspect of this natural wonder. The canyon is protected by the Koke'e State Park which encompasses 4,345 acres of land and has 45 miles of trails that run through the canyon and the nearby Alakai Swamp. The Ranger's Station is located at the Koke'e Museum has hiking maps of the area.


When we hear “Hawaii” most of the people think of dream beaches, welcome with the floral wreaths at the airport and the tourism boom of Waikiki. And many would be really surprised. Yes, the beaches are great and the best, but what the tourist brochures do not reveal is that the waves of at least half of the year there are too high for swimming. And at the shores of the island, you’ll often find crosses, put there for the memory of surfers, who have dash on the rocks.


After all, among all unpleasantness, the famous archipelago, this is the most isolated piece of land in the world, is very well worth to visits. And not because of the relaxing on the beaches surrounded with palm trees – for that you don’t need to sit 20 hours on the plane.
Posted by Places to Visit at 11:50 PM